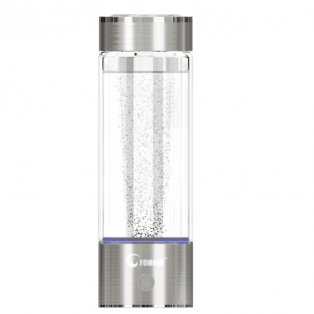 In Japan, hydrogen-rich water is called hydrogen water. Thanks to modern scientific and technological advances, it has become possible to dissolve hydrogen in water, resulting in the formation of hydrogen-enriched water. Simply put, it is water with a high hydrogen content.

Together with the development of society, the pace of life is rapidly accelerating, the environment is becoming polluted, and people are exposed to more and more stress and stress from day to day. All this accelerates the aging process and provokes the emergence of various diseases. In 1956, Denham Harman, a doctor from Great Britain, put forward the well-known "free radical theory of aging", according to which the cause of the aging of the body and the occurrence of diseases are free radicals that are actively formed in the body during breathing, smoking, alcohol intake, with intense physical exertion, as well as under the influence of ultraviolet rays.

Hydrogen is one of the most powerful natural antioxidants. It naturally enters cells, reaching the nucleus, mitochondria and any other areas. Hydrogen selectively neutralizes harmful free radicals and prevents their formation.

Hydrogen has a selective antioxidant effect, it activates cells and stimulates metabolism. Hydrogen (H2) combines with aggressive oxygen in our body, reacts with it and removes it from the body in the form of water (H20).

Peroxide free radicals are the cause of human aging

Oxidation is one of the most basic natural chemical reactions. We can observe this ubiquitous process when rusting an iron nail in a humid environment or when exposed to air on a cut apple.

Oxidation processes also occur in the human body. On average, a person takes about 20,000 breaths a day, inhaling oxygen and exhaling carbon dioxide. 98% of the obtained oxygen is used as “fuel” in the metabolic process, the remaining 2% after the oxidation reaction turns into a harmful substance - peroxide free radicals. In the human body, there are natural antioxidants that neutralize free radicals (superoxide dismutase, peroxide dismutase, etc.), but with increasing age, as well as due to modern conditions, the functions of these enzymes are not enough to completely remove free radicals from the body. Breathing, smoking, drinking, electromagnetic radiation, and gastrointestinal disturbances all generate large amounts of peroxide free radicals.

Peroxide free radicals are extremely active "saboteurs" that can destroy cells in the body. They lead to the formation of oxide on unsaturated fatty acids located on the cell membrane, as a result of which it is damaged, the protein enzyme degenerates, and as a result the aging processes of the body are accelerated. More dangerous is that free radicals attack genes and can disrupt their molecular structure, leading to gene chain mutations. As a result, a systemic disorder occurs in the body and this is the reason for the aging of the body.

When a peroxide free radical damages cells in the body, it creates a powerful, oxidation-resistant, active hydrogen. It prevents the attacks of peroxide free radicals, restoring them to a stable form, thereby protecting the cells of the body from damage. As a result, hydrogen and oxygen combine to form water. The likelihood of pathological changes decreases, the rate of cell death slows down.

1. Stylish ergonomic design, comfortable to use

2. 5 minutes after activating the operating mode, you get hydrogen-rich water.

3. The device automatically stabilizes the electric current, which allows any water to be enriched with hydrogen: it is enough for it to meet the sanitary standards of drinking water.

4. The SPE electrolysis technology is used to separate hydrogen from oxygen. The device is equipped with an atmospheric outlet for ozone and chlorine gas removal, which guarantees high safety.

5. The glass is portable. This allows you to use it not only at home, but on a business trip, office and anywhere else. Anytime, anywhere, you can quench your thirst with healthy hydrogen-rich water.

6. The glass is charged with a DC adapter with a low voltage of -15V (safe voltage, allowing the device to be used in any country in the world).

1. Fill a glass with distilled, mineral or purified water and close the lid (the recommended water temperature is no more than 50 ″ C).

2. Lightly press the power button located on the front surface of the glass.

3. When the hydrogen enrichment is complete, the indicator light will turn off. The water is ready to drink.

4. It is recommended to drink water within half an hour after enrichment, as the hydrogen evaporates over time.

5. The connector for the charger is located on the back of the glass. During charging, the red indicator light will turn on, after charging is complete, it will turn blue.

Taking care of your device

1. Fill the glass with water for 5-15 minutes, during this time shake the glass several times and pour out the waste water. Rinse the glass again with clean water.

3.During moving or carrying, the power of the glass must be turned off.

4. Use original charger to recharge.

5. Do not place the glass in water.

6. When adding water to the generator, make sure the bulb and main unit are screwed tightly to prevent water seepage.

7. Do not cook the same portion of water more than 2 times in a row to avoid excessive internal pressure and damage to the product.

8. If the glass is not used for a long time, it is recommended to charge it once a month to ensure the battery performance.

10. It is strictly forbidden to use any liquid drink other than pure water, mineral water or purified water. For example, soda, tea, juice, coffee, alcohol, soy milk, etc.

1. The main device does not generate hydrogen: the battery may not be charged, please charge the device.

2. If not used for a long time, the SPE ion membrane will dry out, you must add water to the beaker for 8 hours and then continue using.

3. Battery performance may decrease over time.

4. Check that there is electrical current to the base of the device, for damage to the electrical plug, connecting cable and charger.

Water leakage: check that the cup lid is tightly closed / check the O-ring.

A healing effect is achieved - good health, getting rid of diseases, improving the quality of life, and longevity.